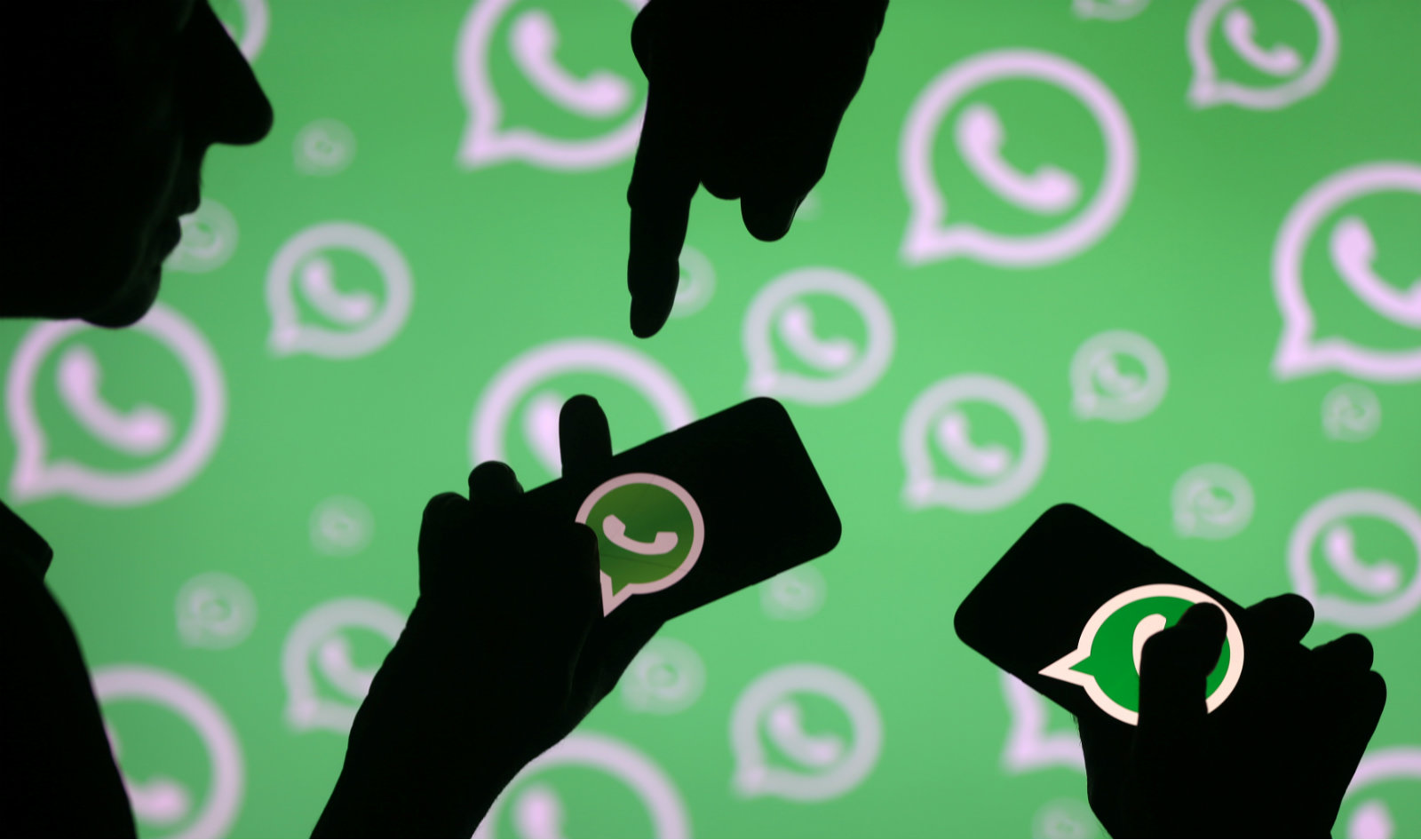 An ongoing political battle of nerves, an upcoming state election, and agitated youth—India’s capital can’t ask for a more fertile ground for the mushrooming of WhatsApp groups.

The past few weeks have seen dozens of them sprouting in Delhi, which goes to polls on Feb. 8.

What stands out is that they are mainly aimed at college and university students seemingly opposed to India’s new Citizenship Amendment Act (CAA), widely perceived as anti-Muslim, even though other citizens aren’t being spared either. Messages fervently back prime minister Narendra Modi’s Hindu nationalist government, which enacted the law. CAA has provoked widespread backlash across India, with major protests erupting across Indian cities and towns, mostly led by the youth.

These groups, with up to 250 members each, are often identifiable by nationalistic emojis and messages that condemn mainstream media and promise to provide “real” news. 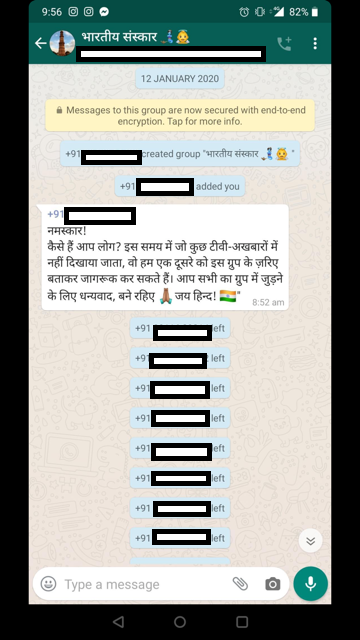 Quartz interviewed over 15 people who said they were randomly added to such groups. Many of them cite a single introductory message: “Greetings! How are you all doing? Whatever you’re not seeing covered on TV and newspapers, let’s discuss. Thank you all for joining. Hail India.” 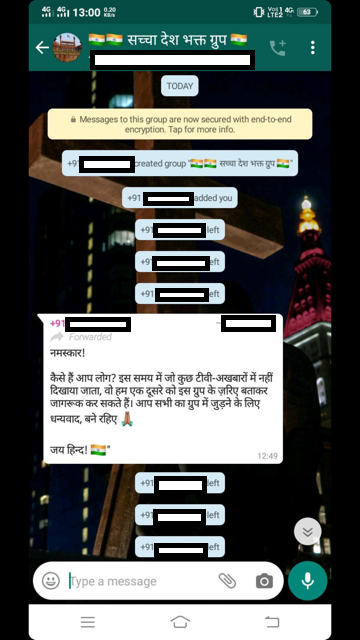 Curiously, at least one such group carried pornographic content.

The pro-CAA side, too, has used the digital arena. For instance, after the Jan. 5 mob violence against the students of Delhi’s Jawaharlal Nehru University was linked to the BJP’s sister organisation, Akhil Bharatiya Vidyarthi Parishad (ABVP), several altered images were unleashed to absolve the ABVP of its alleged responsibility.

“There has been an enormous surge of misinformation and propaganda in the past one or two months,” said Pratik Sinha, founder of fact-checking platform AltNews. “That speaks of the longevity of the CAA issue. This is also the first time in a while that the youngsters are coming out and protesting in large numbers.”

While a direct connection to Modi’s BJP was not apparent, Sonu Yadav, a 21-year-old BBA student at Amity University Noida, was able to establish a tentative link.

On being added to the Namo Abhay Abhiyan 45 group in early January, Yadav ran the phone numbers of the members on the caller-identification app Truecaller. This revealed that one of the group’s administrators was “Abhay Verma Bjp,” the party’s vice-president in Delhi. Verma, however, did not respond when contacted by Quartz on the number.

The thing about misinformation, said Sinha, is that it’s difficult to trace the source, especially when it circulates on WhatsApp. “What we need to focus on is who’s promoting it, or which are the prominent accounts promoting it?”

Posts on another WhatsApp group that Yadav was added to, condemned Bollywood star Deepika Padukone for showing solidarity with the attacked JNU students, he said. “I think they’re going after everyone who is active and against this situation.”

And it’s not just the dissenting youth. Radhika Nagpal, a 23-year-old IT professional in Delhi, said she was added to a group called Bharat Mata Ki Jai some 10 days ago. 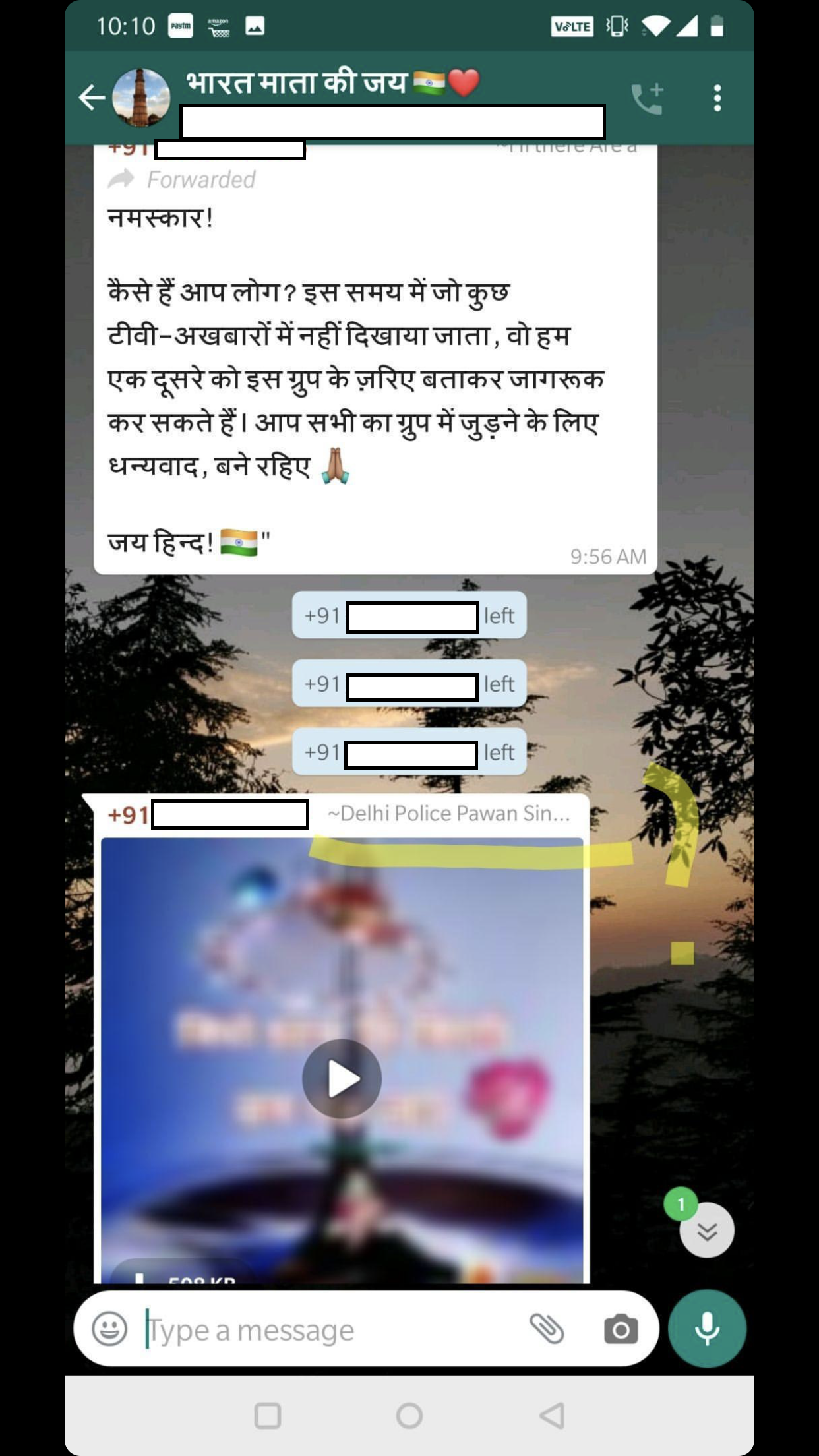 “I didn’t know anyone on the contact list, but the only names visible were non-Muslim ones,” she said. Then came a meme with the message: “When patients don’t understand doctors’ handwriting, doctors aren’t expected to explain—so Modiji shouldn’t be expected to explain either. Modiji, you keep doing what you want.”

Another WhatsApp user named Delhi Police Pawan Singh, who was the first responder on the group (pictured above), caught her attention owing to his connection with the Delhi police.

Quartz contacted Singh, who claimed he is a 22-year-old under police training in Lajpat Nagar. He is slated to join the force in March. “Whoever joins Delhi Police, their number gets added to these groups,” Singh said. “My number was added from the police training centre where my senior colleagues had written it down.”

The rise of cyber troops, which includes actual users and bots, spreading political messages across platforms is not a new phenomenon in India. Social media influencers have been actively speaking out against these pernicious techniques, particularly since the 2014 general elections, when Modi first came to power.

“There’s a certain propaganda that the ruling government and mainstream media will not talk about in public for the sake of diplomacy,” said Sukhnidh Kaur, a student at St Xavier’s College in Mumbai, whose account @pavemented on Instagram has over 40k followers. “However, you can have representatives of the ruling government get on these groups and push the sentiment,” she said.

Group “infiltration” may also be a ploy to access people’s data.

JNU graduate student Shrimi Gupta was cautioned by her classmates against this kind of trolling a week ago. When she was invited to join Bharat Parivar (India’s Family) on Jan. 10, and her friend, Priyanka Das, was invited to Mera Dil Meri Jaan Bharat (My Heart, My Life: India), they were both prepared. 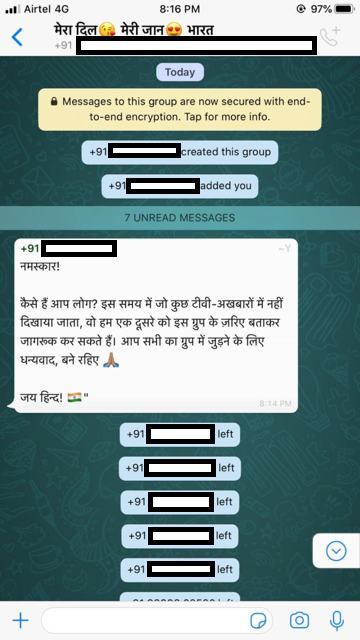 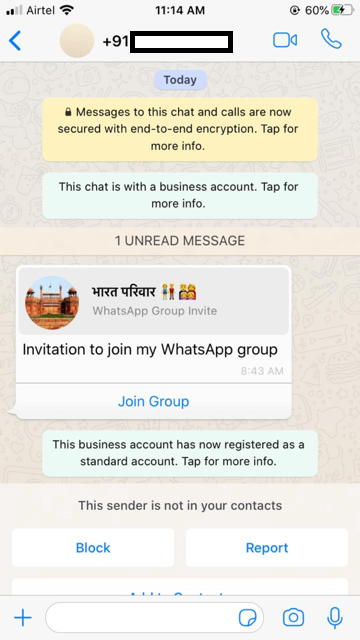 “Given the attack on Jan. 5, it became obvious that this was just propaganda,” she said, suspecting that those forming such groups were also seeking access to images and videos from the night of the JNU attack which could be misused. “I blocked the guy who’d sent the invite.”

Unfortunately, said AltNews’s Sinha, most social media platforms are global and do not cater to the unique situation in each country, adding that this could be hugely detrimental to Indian democracy.

“It already is,” Sinha said.

China is leveraging the coronavirus crisis for diplomatic gains