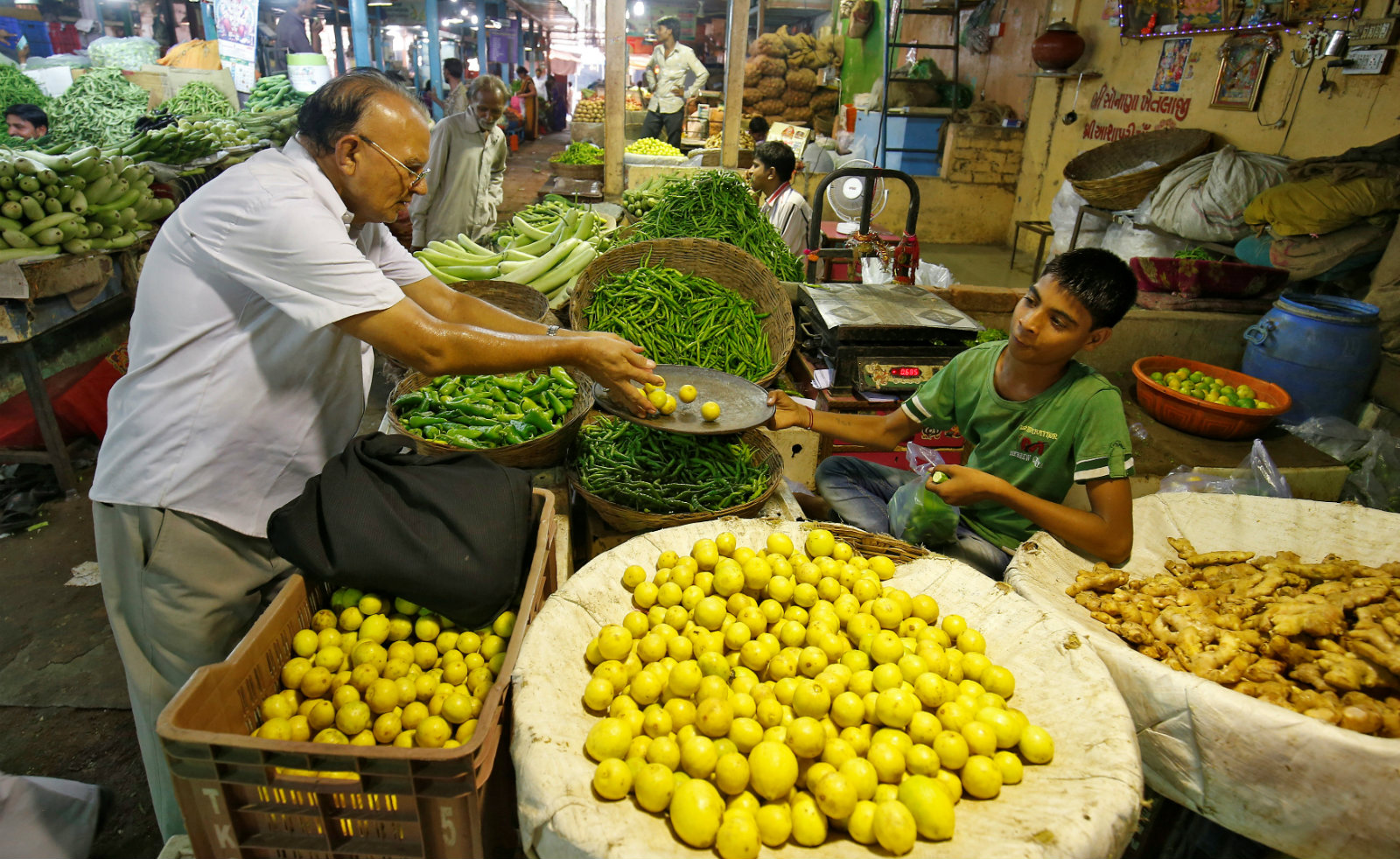 For the past five months, Trupti Kamle has been torn between two difficult choices: either saving money for her son’s education or ensuring that he is fed well. The reason for her dilemma is something that has been plaguing households across India in recent months—unprecedented food inflation.

A domestic worker from suburban Mumbai, Kamle has always kept aside half of her income—currently Rs12,000 ($170) a month—as savings for her six-year-old son. Since her husband, an office assistant, spends his entire monthly income of Rs8,500 on rent for their slum home, Kamle has to run the house on her own income.

By spending carefully and saving Rs6,000 a month, she has been able to enrol her son in a private, English-medium school, pay for extra-curricular activities and start a small fund for his college education. “But now, food is so expensive that we will not be able to eat normal meals if I try to continue my savings system,” said Kamle, 28.

In December 2019, consumer food price inflation hit 14.12%, the highest in six years. The inflation has also been alarmingly rapid, rising from 2.99% in August to 5.11% in September and 7.89% in October. In November, food inflation rose to 10.01%, entering double digits for the first time since December 2013.

For working class consumers like Kamle, the relentless rise in food prices has meant constantly having to make tough decisions.

Onions that cost Rs120 per kg last month are now priced at Rs70 per kg, but that is still twice the amount that Kamle paid for them in early 2019. Dals, rice, flour, and vegetables all cost between 10% and 30% more than they did in October 2019, and the price of the rawas fish that Kamle’s family eats once a week has shot up from Rs100 per kg to Rs200 per kg in just two months.

“We have switched to a cheaper fish and don’t eat meat as often as before, but I am not willing to make more compromises in our regular simple meals,” said Kamle. “My son is a growing boy and I want to provide him with healthy, good food.” 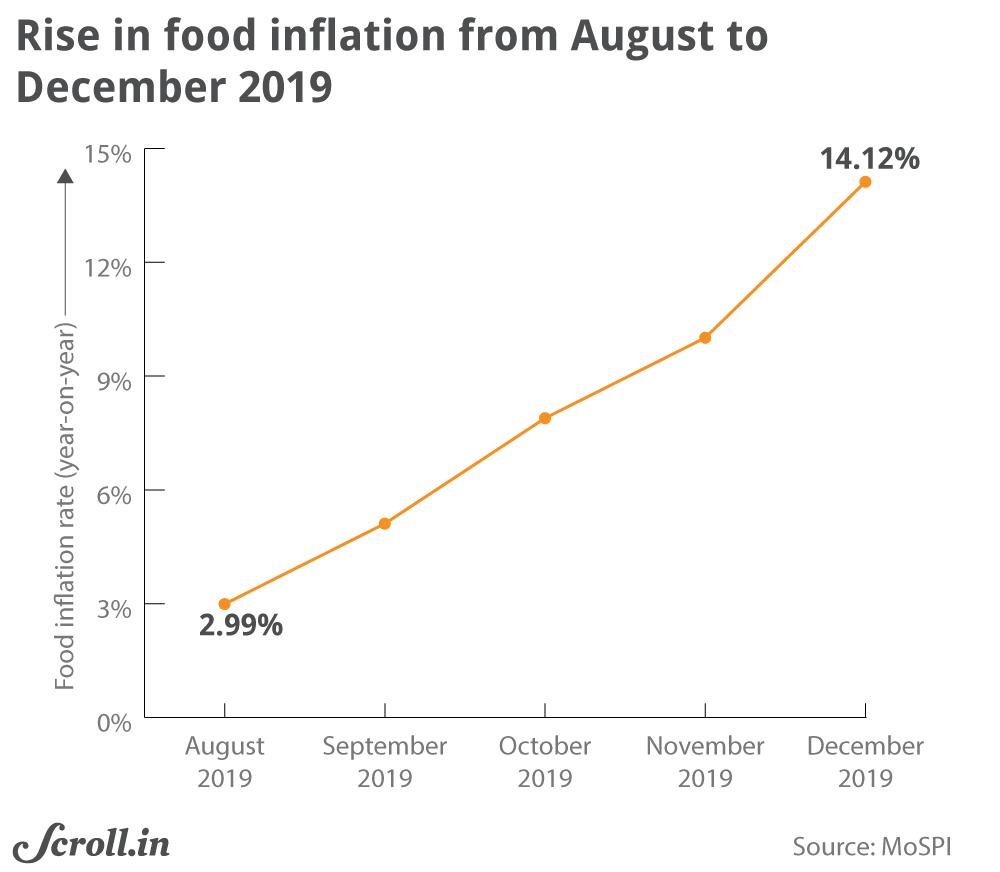 Kamle’s choice has meant rapidly dwindling savings and forcing her son to forgo some school activities and events. Not far from where she lives, Savita Tambe has made the opposite choice.

“We can’t compromise on our children’s education, so my family is making very big adjustments in our food and other expenses,” said Tambe, a hawker who sells socks and handkerchiefs outside Mumbai’s Andheri station. Her son is a first-year student at a private industrial training institute, while her daughter is in the middle of a course on make-up and hairstyling.

Tambe and her husband, who is also a hawker, earn between Rs200 and Rs300 a day, and used to manage savings of up to Rs3,000 a month. For the past six months, however, they have been able to save nothing, while their meals keep getting costlier.

“We put less of everything in our sabzi-bhaji now. Dals and vegetables that we would buy for one day, we are now making it last for two days,” said Tambe, who is also making her worn-out saris and slippers last longer than she has ever done before. “We have to do it, because my children always need to buy something or the other for their studies and projects, and their education is most important.”

According to economists, households across the country will have to brace for such drastic changes in their financial planning for at least another three months.

“It looks like food inflation will remain high till April, when the rabi crops are expected to come in,” said economist Himanshu, an associate professor at Delhi’s Jawaharlal Nehru University. “Even then, food prices can still be affected by problems in supply-chain management and increase in oil prices, if tensions in west asia continue.”

In most parts of India, prices of vegetables and many fruits were driven high because of crop damages caused by excessive and unseasonal rains, which hit supplies. Onions saw an almost 200% rise in prices in November and December 2019, sparked by a poor rabi harvest last year. But wheat and other cereals have also seen a price inflation, which Himanshu does not attribute to natural causes.

The FCI is storing double the amount of rice stocks than the buffer norm.

“The government is currently stocking much higher quantities of cereals in its godowns than the buffer norms,” said Himanshu. Buffer norms are the minimum amount of food grains that the central government should have in storage at the beginning of each quarter of the year.

In Mumbai, grocery vendors serving middle- and lower-middle class clients claimed that sales of wheat, dals and rice have not reduced even though their prices have increased by Rs20-25 per kg in the past three months. “These are absolutely basic food items so people cannot really cut down on them,” said a grocery store owner in Mumbai’s Bandra suburb.

Several fruit and vegetable vendors, however, lamented a 20-50% slowdown in their businesses because of inflation.

Fruit and vegetable vendors are witnessing a 20-50% slowdown in business.

“Onion prices have been high for a long time. Last month potato prices rose from Rs25 to Rs40 per kg, and now garlic prices have also doubled to Rs200 per kg,” said Rahul Mishra, a vegetable vendor in Mumbai’s Andheri suburb. “My customers are buying very cautiously and they often joke that they should become Jains, so they won’t need onions and garlic and potatoes anymore.” The Jain community traditionally avoids root vegetables on religious grounds.

Fruit vendor Ranjit Sonkar said that his sales have been low for the past four months even though fruits like apples, papaya and oranges have seen very marginal price rise. “People buy fruits only when they have bought enough vegetables for their meals and have money to spare,” said Sonkar. “Right now people do not have the choice to give up proper meals in favour of fruits.”

For Uttam Kamble, a 57-year-old cobbler in Andheri, fruits have always been a luxury he could not afford. He earns between Rs8,000 and Rs10,000 a month and is the sole breadwinner for his wife, widowed daughter and three young grandchildren. “There is very little money in working as a mochi [cobbler], but the municipality has given me a mochi license and refuses to let me change it,” said Kamble. “The government does not care about us Scheduled castes. They want me to die a mochi.”

The food inflation means Kamble’s family has had to cut down on vegetable consumption. “We have drastically reduced the quantity of onions, garlic, salt and spices put in our daily cooking,” said the cobbler. “Food is no longer enjoyable, but what else should we do?”

This article was originally published in Scroll.in.

Like unchecked growth, economic decline too can have environmental fallouts in India

A layoff frenzy has gripped India Inc, and it may worsen in 2020

Is the Indian economy headed for a middle-income trap?

Peloton is just Spotify, if Spotify mailed you a bike

obor - August 28, 2019
0
Much of what you're paying for in a subscription for the indoor bike company is essentially a music streaming service.

What to anticipate at CES 2020

Everlane’s Goal To Eliminate Virgin Plastic By 2021 Is On Track—Here...

Researchers Construct A Particle Accelerator That Suits On A Chip