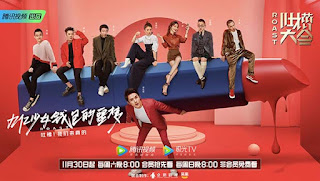 (China Daily) Roast, a popular online variety show on streaming media platform Tencent Video, has contributed many topics to the daily conversation among Chinese youth over the past few years. Now it's back to continue that conversation.

The fourth season of the show will air via Tencent starting Saturday. Ten episodes will be included in the new season, and a new episode will be released every week.

In the show, professional stand-up comedians and celebrities from various fields are invited to make humorous "criticisms" of each other to expose young audiences to the real situations of different industries, thereby sharing the celebrities' difficulties and challenges behind the scenes.

Many celebrities who seldom show their humorous side to the public will thus get a chance to tease others and not take themselves too seriously. For example, kung fu movie star Donnie Yen, who keeps a masculine and serious image with the public, can poke fun at himself and others. Athletes like swimmer Sun Yang and Zhang Weili, a women's ultimate fighting champion, will also join the show.

Premiering in January 2017, Roast has expanded its scope from the entertainment industry, following the ever-evolving internet industry. Li Jiaqi, a popular online broadcaster promoting cosmetics, and Liu Mou, an e-sports athlete, will become major guests for this season as well.

"In the time of the internet, it's difficult for a celebrity to be widely known by all people," Qiu Yue, a producer of the show, said at a pre-screening of the new season in Beijing. "In the new season, we'd like to keep contributing new blood, break barriers among different circles and let their living conditions be better known by others."

Ye Feng, head of Fun Factory, the studio that co-produces the show, also expected the enlarging influence of the show to eventually contribute to a boom of stand-up comedy in China.